What is a firming asset?

Renewable solar and wind energy is rapidly increasing market share, but our customers still need electricity when the sun stops shining and the wind stops blowing.

CleanCo’s flexible low-emissions assets can ramp up quickly to ensure our customers continue to receive reliable low-emissions energy when solar and wind generators are not producing. Combined, our firming assets have the capacity to generate 1120MW, and a typical customer contract would be backed by supply that is about 90% lower emissions than the grid. 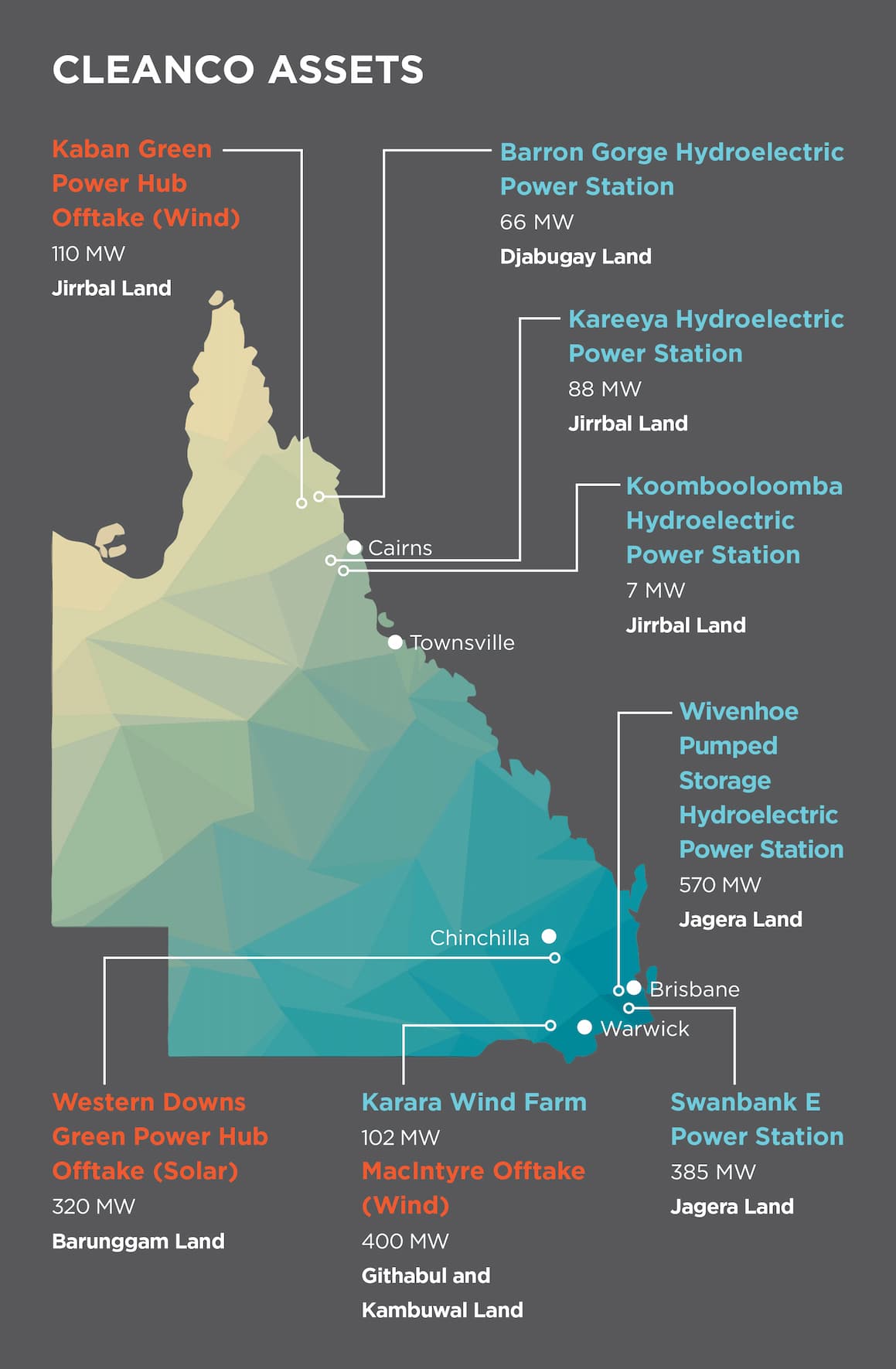 Barron Gorge Hydro sits 20km north-west of Cairns, nestled in the rainforest of the Barron Gorge National Park. The power station forms part of the Mareeba Dimbulah water scheme and utilises natural water inflows in the catchment, along with water released from Tinaroo Falls dam. The Kuranda Weir acts as a regulating pool, diverting water from the Barron River underground to the two 33 MW electricity generators, which produce clean energy before releasing the water back into the river in the same pristine condition it entered the power station.

The Djabuganydji Bama are the Traditional Owners of the area known by Djabugay People as Din Din, which includes Barron Gorge National Park. Din Din is an area of high cultural significance for the Djabugay People, a sacred place that has been a part of their storytelling for tens of thousands of years. The world heritage rainforest and spectacular Barron Falls can be seen and enjoyed from various vantage points in the national park. For those looking to get even closer to the action, the Barron Gorge Hydro has long been associated with white water rafting adventures on the Barron River.

In its nearly 60 years, the Barron Gorge Hydro has evolved, withstanding multiple cyclones, monsoons and river floods while continuing to provide reliable clean energy for Queensland. In October 2019, CleanCo Queensland took ownership of the Barron Gorge hydro power station. We’re proud to continue operating this asset as part of our portfolio of clean, dispatchable energy to support a reliable electricity supply for Queensland.

The Power of Big Water

The Tully region in Far North Queensland is the wettest in all of Australia, making it the perfect location for converting water into clean energy. And that’s exactly what our Kareeya and Koombooloomba run-of-river hydro power stations do. Beginning at the Koombooloomba Dam, water flows through Koombooloomba Hydro then to Kareeya Hydro to generate another round of electricity. Once the water’s been used, it’s released back into the Tully River in the same pristine condition as when it entered the power station. CleanCo is committed to meeting the strict environmental standards of this Wet Tropics World Heritage Area which allow us to sustainably use these natural resources to generate renewable energy.

But it’s not only water that powers these sites. It’s the community and rich history behind them that makes Kareeya and Koombooloomba special. In fact, Kareeya Hydro, which takes its name from the indigenous word for ‘big water’, has now been operating for over 60 years. Construction began back in 1950, creating many local jobs. To give these workers and families a local place to call home, Cardstone Village was established in 1955. The village was home to 29 households, a post office and a school, and helped create a strong sense of community around the Kareeya power station. Similarly, Koombooloomba Village was created over at the Dam. It was fondly referred to as ‘Nappy Valley’ by workers and their families thanks to it being a wonderful place to raise children.

The station continued to successfully pump clean electricity to the local area, but it soon became obvious that a more efficient way to transport staff and equipment between Kareeya Hydro and Koombooloomba Dam was needed. As the crow flies, the sites were extremely close, but the dense, rocky terrain meant that travelling between the two took hours by road. So, in 1973, a cable car was built. It was 852 metres long and 472 metres high and is still used today. Visitors to Far North Queensland may recognise similarities between the Kareeya cable car and the Kuranda Skyrail.

In 2000, operations were expanded with the addition of another hydro station at Koombooloomba. Today, with a combined capacity of 95 megawatts, Kareeya and Koombooloomba Hydro continue to produce energy for Queensland, without emitting any greenhouse gases.

On 31 October 2019, CleanCo took ownership of the two hydros which play a key role in CleanCo’s portfolio of clean, dispatchable energy to support a reliable electricity supply for Queensland.

Situated near Fernvale in the Somerset Region of South East Queensland, the Wivenhoe Power Station is the only pumped storage hydroelectric power plant in Queensland. And a powerful one at that. The two nominal 250 MW generators are the largest Francis type turbines in Australia, weighing a whopping 1,500 tonnes each.

Water is pumped from Wivenhoe Dam, uphill to the Splityard Creek Dam. This pumping activity generally takes place during the day when solar output is high and power prices are at their lowest. The water is then stored in Splityard Creek Dam until it’s required to support reliable energy generation during peak demand times. In this way, Wivenhoe Hydro acts like one giant rechargeable battery, with the ability to ramp up impressively quickly to generate electricity. With a volume of 28,700 megalitres, Splityard Creek Dam has the capacity to support up to 10 hours continuous power generation.

Wivenhoe Power Station was built at the same time as the Wivenhoe Dam; both were commissioned in 1984. Since then, Wivenhoe Power Station has ensured Queenslanders have access to reliable clean energy that can be quickly dispatched to meet demand. It plays a key role in CleanCo’s portfolio, providing firming capacity to support renewables such as solar and wind.

Lake Wivenhoe, where the hydro draws water from to store in Splityard Creek Dam, is the largest lake in South East Queensland and provides half the region’s drinking water. Interestingly, the Wivenhoe Dam reservoir holds double the capacity of Sydney Harbour, and about seven times the capacity of the Gold Coast’s Hinze Dam.

But more than that, Lake Wivenhoe is a beautiful area filled with recreational areas. Those seeking a lakeside retreat can canoe, kayak, camp, picnic or take a hike on the nearby trails. 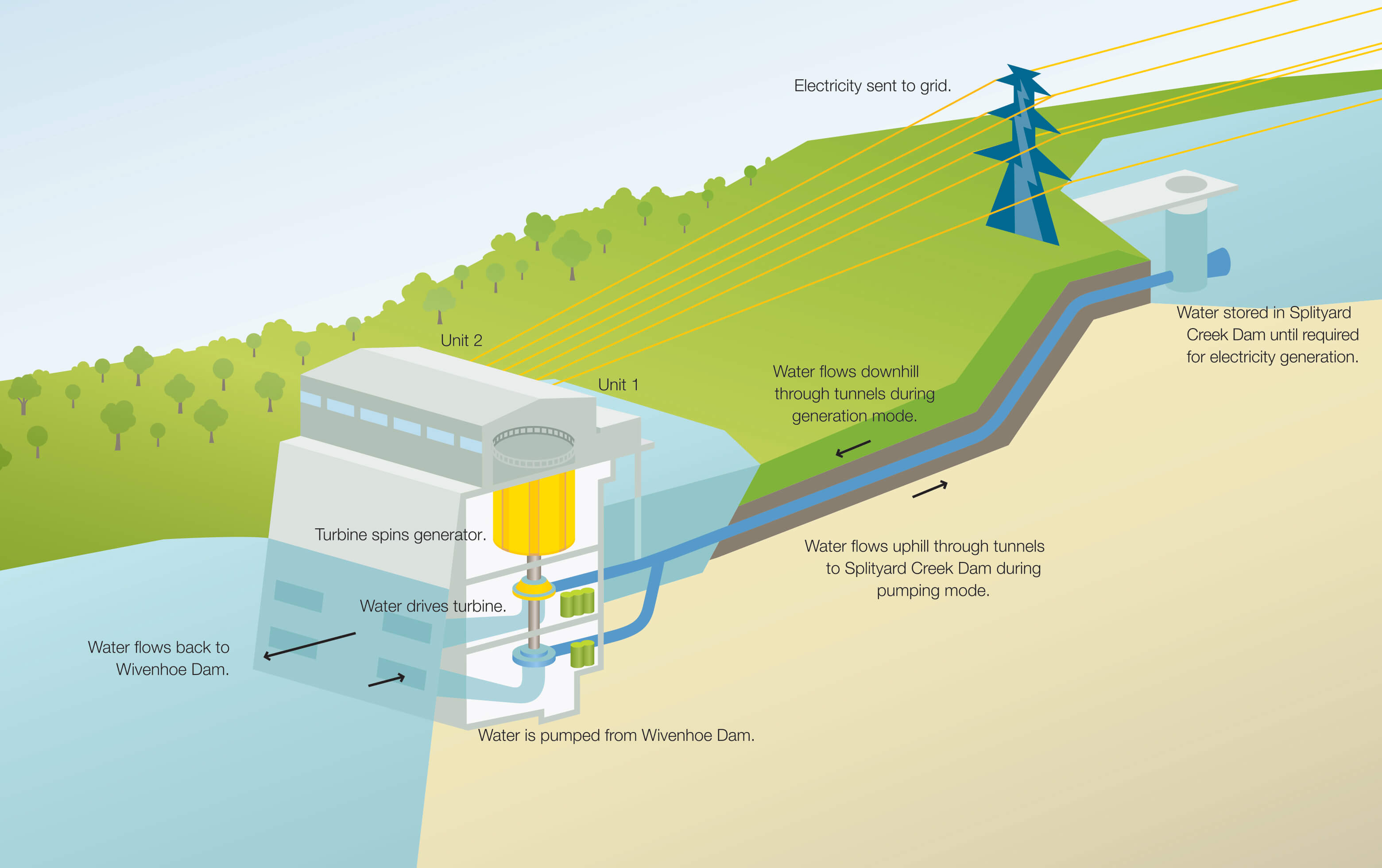 Just outside of Ipswich, on the edge of Swanbank Lake, sits our Swanbank E Gas-fired Power Station. Once part of a precinct of coal-fired power stations – Swanbank A, B, C and D – Swanbank E remains the only operating power station on the site. At the time of commissioning, Swanbank E was the most efficient power station in Australia.

What sets Swanbank E apart from its coal-fired predecessors is that it is powered by an Alstom GT26 Gas Turbine, which produces less than half the greenhouse gas emissions. The Alstom GT26 is a single shaft machine where Gas Turbine and Steam Turbine are connected to a single generator. The gas turbine generates up to 240 MW of power and exhaust waste heats through a Heat Recovery Steam Generator (HRSG) which produces steam energy sufficient to generate up to a further 145 MW of power via the steam turbine. To continue to keep our environmental impact minimal, Swanbank E uses recycled water for all of the station’s cooling needs.

The Alstom GT26 was the largest gas turbine in Australia when it was first commissioned in 2002 and broke the world record in 2011 for continuous operation, running for 254 days straight. So, while we are continuing work to minimise any impact to the environment, Swanbank E has certainly made an impact on the history books.

The Swanbank precinct also makes for a scenic day out. The Swanbank rail loop, which was used to supply coal to Swanbank A and B coal fired stations, is now operated by the Queensland Pioneer Steam Railway. You can catch a trip on a beautiful old steam train from the heritage railway station at Swanbank and have a picnic by the lake.

More than just a place for reliable energy generation, in 2013 the decommissioned Swanbank B set the scene for a unique and powerful performance by the Underground Opera Company, performing to an audience of 220 people.

Swanbank E plays a key role in CleanCo’s generating portfolio, enabling us to firm variable renewable energy sources, such as wind and solar, and provide reliable and affordable clean and low emission energy to all Queenslanders.

Our projects will add renewable energy capacity to our portfolio, ensuring we can continue to deliver reliable low emission energy at a competitive price for all Queenslanders.
Karara Wind Farm

Situated 50 kilometres south west of Warwick in South East Queensland, the Karara Wind Farm is being built in conjunction with the MacIntyre Wind Farm, which together form the MacIntyre Precinct.

The 103MW Karara Wind Farm will be delivered through a partnership with Acciona Energy and owned and operated by CleanCo.

The overall MacIntyre Precinct will support up to 400 jobs during construction and invest more than $500 million in Queensland’s regional economy.

CleanCo has agreed to purchase 110 MW of renewable energy from Neoen’s Kaban Green Power Hub located near
Ravenshoe in the Atherton Tablelands, 80km south-west of Cairns.

The project will support 150 construction jobs and provide a revenue source for local farmers hosting the turbines.

Early works will commence in late 2020 and first generation is expected in 2023.

Find out more about the Kaban Green Power Hub.

Situated 50 kilometres south west of Warwick in South West Queensland, the MacIntyre Wind Farm is being delivered by ACCIONA.

CleanCo has committed to purchasing 400MW through a power purchase agreement resulting from the Queensland Government’s Renewables 400 initiative.

The project will support up to 400 jobs and invest over $500 million in the regional Queensland economy.

Early works are expected to commence from mid-2020, with construction to commence in mid-2021 and the entire MacIntyre Precinct to be operational in 2024.

The project, which will include Australia’s largest solar farm, is expected to generate up to 400 jobs and 400 megawatts of new renewable energy for Queensland.

Construction will commence in July 2020 and generation is scheduled for the first quarter of 2022.

Find out more about the Western Downs Green Power Hub.

In line with our mandate, CleanCo is focussed on pursuing opportunities that will support the energy transition in Queensland and facilitate jobs and economic growth in regional Queensland.

In addition to integrating competitively priced renewable energy into the grid in a reliable way, we are supporting flagship, low-emissions industrial precincts where our globally competitive clean energy attracts traditional and emerging industries to stay or grow in Queensland. Because we are focused on improving energy affordability for Queensland today, we are interested in technologies that have been proven at commercial scale.

If your project aligns with these strategic objective and has reached the stage of pricing an offtake, we would be happy to discuss your proposal with you.

Please send your contact details and a detailed overview of your proposal to info@cleancoqld.com.au. If your proposal is in line with CleanCo’s commercial strategy and broader objectives, a member of the Development Team will be in contact.